Gerrymandering - the process of drawing political districts in such a manner as to favor your political party - is an abhorrent abomination and its existence representative of a major flaw in our Constitution. At the US Congressional level, it has become so bad that Republicans were able to capture a solid majority of seats while getting fewer votes than Democrats. One question that came to my mind was to ask how common such an occurrence was, so I dug up the data going back to the WWII era (via Wikipedia), and combined it below. 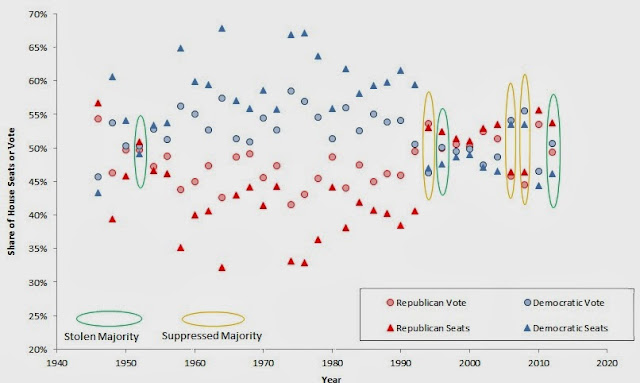 In the 34 election cycles represented, only three times - 1952, 1996, and 2012, did a party win a majority of seats without winning the two-party vote. All three times favored Republicans. On only three other occasions (1994, 2008, 2010) did the party that won the two-party vote receive a smaller share of seats than share of votes (1994 pro-Democrat, 2008/10 pro-Republican). You would expect this to be rare in a winner-take-all districting system. Indeed, if people were distributed homogenously with respect to partisanship, 50.1% of the vote would be enough to capture every seat! Clearly, we are not distributed homogenously, so the minority party still receives substantial representation. However, in 28/34 elections, they have won fewer seats than their share of the vote.

So is there evidence of gerrymandering in that data? Yes, substantially evidence in fact, with a huge turning point coming in 1994. I have plotted share of vote versus share of seats below, split before and after the "Republican Revolution" of 1994.

Prior to 1994, there was clearly a pro-Democratic bias to the data, with Democrats receiving approximately 24 more seats than Republicans for the same share of votes. However, Democrats were winning those elections by substantial margins and basically this amounted to padding their already formidable lead. At no point did they ever steal control of the House. In fact during this stretch, Republicans managed to swipe one election.

In contrast, a sea change occurred in 1994. Not only did Republicans start winning elections, but the gerrymandering flipped in their favor, with an approximate 14 seat advantage since that time. A careful look at the data reveals something else as well: the slopes of the lines have changed significantly. Prior to 1994, a 1% change in the vote resulted in a shift of about 7.9 seats. Post 1994, this has shifted to only 3.7 seats, implying that incumbents are much more heavily protected than they used to be. This also implies that Republican's 14 seat advantage is actually harder to dislodge than the old 24-seat Democratic advantage, because the latter could be beaten with a 3% vote advantage while the current Republican advantage would take a 4% victory to defeat. ﻿In fact, it is likely worse than that now. The 2012 election, which occurred after very favorable redistricting for Republicans, resulted in Republicans capturing 234 seats vs a predicted 214 for the model, an over-performance of 20 seats. This districting, which is largely fixed until the 2022 elections, could be giving Republicans as much as a 6% advantage in the vote, implying Democrats would need to capture around 53% of the total vote just to win a bare majority. At no time in our modern history has such a wide gap existed.

I find it ironic that the Founder's will has been flipped on its head. Originally, Senators were chosen by the state legislatures, and Representatives, in accordance with the Constitution, were chosen by the people. The 17th amendment resulted in direct election of Senators by the people, but gerrymandering has largely caused the House election to be controlled by the state legislatures who draw the districts!

I call on all my fellow citizens to help end the practice of gerrymandering, by taking districting out of patently partisan hands and moving it to a commission-based model that has been successful in a number of states with respect to drawing more compact, fairer, and more competitive districts.